IEC 62056-21 is a communication protocol often used by energy suppliers in their energy meters – mostly for electricity, but also for thermal and gas meters (as per EN 1434-3 standard). This protocol is included in IEC 62056 – family of standards maintained by International Electrotechnical Commission for electricity metering data exchange. It is a part of the “smart grid” suite of protocols and it is included into DLMS/COSEM specification.

IEC 62056-21 electrical meters usually are different from 96x96 and DIN-rail electrical meters with Modbus protocol. Utility meters are bigger in size, have a restricted access to configuration parameters and very limited user interface – they often have just a single button to switch between few values on the screen. Instead they are equipped with an optical probe interface, allowing energy suppliers to connect to the meters in a fast and safe manner temporarily. 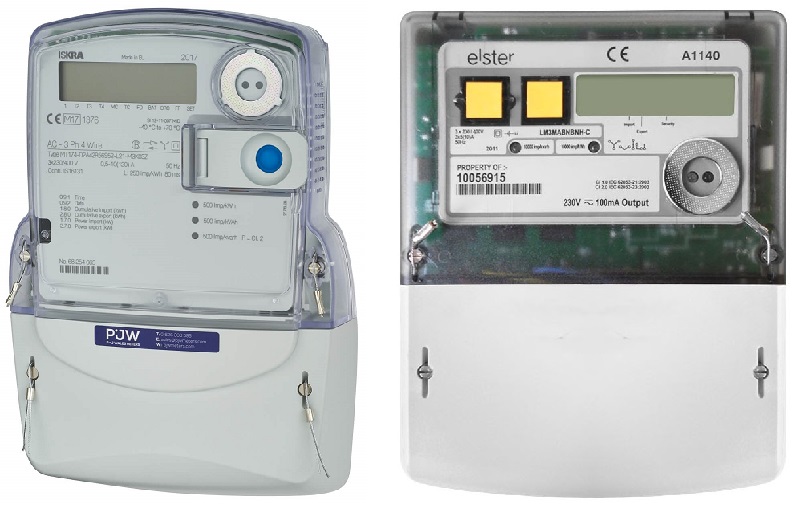 IEC 62056-21 driver for Niagara allows it to establish connection to the meter, discover all its data points with OBIS identifiers and then periodically read their values. That could be a simple and effective way to get real-time and historical values (kWh, kW, kVA, kVAr, V, I, pF etc.) from the main utility electrical meters into a building management system or an energy monitoring system. These values, along with sub-metering values retrieved from Modbus meters, can then be analyzed, shown on dashboards, used for cost prediction and building performance metrics.

IEC 62056-21 is a standard for communication with energy meters adopted and maintained by IEC. Historically it had many names. It all started in 1980s, when companies Ferranti and Landis+Gyr have developed FLAG protocol (“Ferranti, Landis And Gyr”, naturally) for local data exchange with their electrical meters. The protocol was developed for a 4-bit microcontroller, believe it or not.

Their initiative was successful and FLAG soon became a subset of IEC 1107 standard. FLAG protocol has long been obsolete, but its FLAG ID – short identifier for meter manufacturers – is still used in many modern protocols, including M-bus. In 1997 IEC 1107 was renamed to IEC 61107, when “60000 series” IEC names were introduced. And finally IEC 61107 became IEC 62056-21, when a few standards related to smart grid were consolidated under IEC 62056 umbrella.

How meters can be connected to Niagara devices?

IEC 62056-21 protocol can be implemented on many physical media, including but not limited to:

RS-485 is the best case, as it can be directly connected to Niagara JACE or any OEM device.
RS-232 can be connected directly, but with only a single meter per Niagara port, which might limit your options. In such cases RS-485/RS-232 converters can be used to connect many meters.
Optical probe (same as optical head) and current loop (digital 0-20mA interface) should be converted to RS-485 with signal converters available on the market (price range EUR 30-100).

OBIS is the Object Identification System defined in IEC 62056-61 standard. It is an extended version of EDIS – Energy Data Identification System.
OBIS defines a hexadecimal string to identify every possible value one can find in energy meters. For example 1.0.26.8.0.255 means “Reactive energy in Quadrant 2, phase L1”. OBIS codes could be complex to decypher, fortunately, our driver takes care of it: discovered values will be presented with a human-readable names and descriptions.

IEC 62056-21 driver for Niagara supports mode A, B and C. Mode D is only for handheld units and is not for automatic meter reading. If the meter supports mode E, the driver tries to downgrade the protocols to mode A, B or C, which usually allows it to continue communication and read all necessary values.

In addition to these modes, meters can function in data readout or programming mode. The programming mode is not supported in the driver. That is done on purpose, to make sure that in no circumstances meter settings or values could be altered.

DLMS or Device Language Message Specification is the suite of standards developed and maintained by the DLMS User Association (DLMS UA) and has been adopted into the IEC 62056 series of standards.

COSEM or Companion Specification for Energy Metering, includes a set of specifications that defines the transport and application layers of the DLMS protocol. The DLMS UA defines the protocols into a set of four specification documents namely Green Book, Yellow Book, Blue Book and White Book.

Can I connect my meter to Niagara if it has a DLMS logo?

It could be possible, but only if IEC 62056-21 is supported as well. Meters with DLMS logo most likely communicate using IEC 62056-46 HDLC protocol, but these meters often use IEC 62056-21 to initiate communication and then allow switching to HDLC in mode E. Our driver will choose mode C to read all meter’s data.